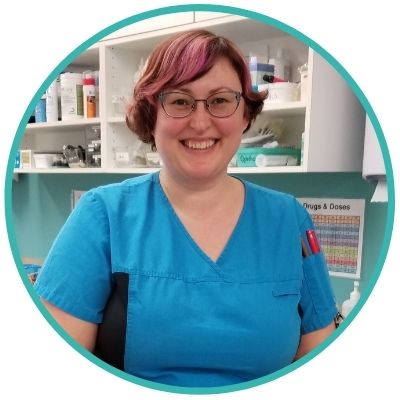 Maegan has been a veterinary technician for 20 years, but prior to this – believe it or not as you like – she had several colorful careers. Soon after graduation she began a long and lucrative career overseas, specializing in the pirating arts. Focusing solely on thieving Ritz crackers, she carved out a niche that had never before been explored. A particularly harrowing chase – pursued by the Canadian Coast Guard through the Salish Sea, loaded down with 18 cases of blackmarket crackers – caused her to re-evaluate her career path.

Following her retirement from piracy, she took up the sport of backyard bare-knuckle boxing as a form of relaxation (and to use some of her old skills). After holding three different title belts, she was controversially stripped of her championship status when it was revealed that she had stainless steel implants inserted into her knuckles – an addition never explicitly banned in the rules, she asserts.

After a short stint following the Grateful Dead on tour, Maegan was willed a capybara from her favorite tattoo removal specialist.  This surprising bequeathment started her love for animals, and sparked her decision to become a vet tech (which, believe what you will about the rest of this tale, is a profession she absolutely loves!).

Originally established in 1965, Elk Lake Veterinary Hospital has undergone several renovations and updates over the years. Today the hospital is a modern surgical and medical facility that allows us to provide quality care in a comfortable setting. Elk Lake Veterinary Hospital serves the communities of southern Vancouver Island which are located on the traditional and unceded territories of the Lkwungen (Esquimalt and Songhees), Malahat, Pacheedaht, Scia’new, T’Sou-ke and W̱SÁNEĆ (Pauquachin, Tsartlip, Tsawout, Tseycum) peoples. We are grateful for the opportunity to live and work in this special place.

Parasites and Your Pet